Firstly – a huge apology for the build up of lag over the past month.

It didn’t follow any mod updates or other changes, so wasn’t the easiest thing to diagnose, but after some testing and digging (and after poking the server with a variety of sticks until we found the point that made it yelp), we were able to work out what the problem was.

The auth file was big and Minetest checks it far too often.

A lot of servers clear the auth file of players who didn’t sign in for a year, but Dark Lands hasn’t (quite!!) existed for a year yet. The very fact that we had this issue is evidence of just how busy, (and dare I say successful), the server has been. Of course, this only meant fixing it was even more important.

So our team went to work:

To all the players who stuck with us: you are awesome. Thank you for being so understanding. The messages we had, showing us that you felt the server was worth being patient for and in recognition of our work really made this easier. Thanks for sticking with us.

Now please get back to taming those dragons again. 🙂

This is the update a lot of you have been waiting for. Dragons now spawn in the wild!

They can be tamed and ridden, though it’s exceptionally difficult to do so, and the admin team won’t tell you how! Finding them alone might prove a challenge.

Here’s the only clues you’re getting:

The rest is for you to figure out.

Updates for the month to date. More will probably follow.

A number of small but important mod fixes have been made over the last month:

I know it’s more exciting when we announce new content, but fixing things is very important to maintain the server long term. We’ll probably be in fixing mode for a while to come, because there are still more issues. Hopefully this makes the servers run smoother for everyone.

Both Red Cat Creative and Dark Lands Survival have now been updated to 0.4.16.

Everything seems stable on both servers so far, but please comment here to report any issues.

In fitting with the Dark Lands server’s theme, it’s now only possible to attack other players in protected areas during the night. It’s the darkness that’s meant to be dangerous after all, not the day time.

To those who love running round killing other players – sorry for this, but some balance was needed.

To everyone else – You can now relax a bit more when the sun is out. Just pay attention to where you are and be sure to hide away before sundown if you want to be safe.

Other minor updates for the Dark Lands server include:

This was made by Benrob0329. His other Minetest videos are all worth a look as well, so please check them out and offer him some support and encouragement. Minetest needs more people doing things like this.

I was getting worried about our servers being a little quiet lately… Then I saw this. 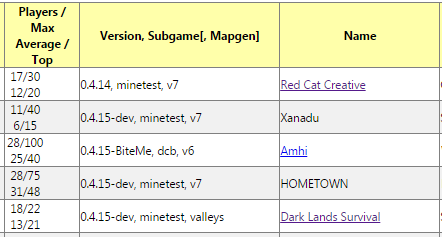 RC and DL both in the top five. We’ve had a flood of new players lately, so this is great to see.

So I managed to break carpet beds on Red Cat long long ago, and was rather useless about fixing them.

Good news: They are now working and can be placed again.

Bad news: All old ones will now be unknowns. There wasn’t really a good way to avoid this, but given how long it’s been since they were working, this shouldn’t upset many current players.

If you do come across unknowns that were once beds, please fix them.

Sorry it took so long to get this done.